Want Your Robot to Fight? Don’t Forget Its Batteries!

The usage of unmanned ground systems (UGV) by military forces all over the world is still in its infancy. One of the key challenges for UGV developers is the need for reliable and high energy capacity onboard, using the  lightest weight and volume.

Military robots are expected to be deployed in growing numbers by advanced military forces all over the world in the coming decade, and many military organizations are already in the midst of field evaluation and integration of such systems. The range of UGV missions is quite wide: reconnaissance, medical evacuation, logistical support, ordnance disposable, and even strike and combat missions, e.g., wherever it is too dangerous or the ordnance too heavy for human warriors to operate.

With humanitarian ethics becoming an ever-stronger factor in Western societies, and with technology enabling more precise and intelligent autonomous activity, land forces tend to fight in standoff positions. The most up-to-date term for the usage of robots on the battlefields is nicknamed “standoff inside.” On the one hand, a human combat soldier can be located outside the most dangerous locations, but on the other hand he is able to view the battlefield in the most intimate manner, just as in a top-notch video game.

As in many other fields, military robots can often do the job better than a human. “Machines don’t get tired. They don’t close their eyes. They don’t hide under trees when it rains and they don’t talk to their friends,” said Major Kenneth Rose of the US Army’s Training and Doctrine Command. “A human’s attention to detail on guard duty drops dramatically in the first 30 minutes [whereas]… machines know no fear.”

The usage of ground robots is still in its infancy, but the trend is expected to accelerate as the development and testing of new equipment increases. For example, the German Army has awarded a $162.4 million contract to General Dynamics Land Systems to produce 624 Small Multipurpose Equipment Transport (SMET) systems.

The Israel Defense Forces (IDF), a pioneer in this field which has been operating land tactical robots for more than 20 years, recently unveiled its Multidimensional Unit “REFAIM,” which tests and integrates advanced land robots, micro drones and other unmanned technologies prior to their wide integration into other units.

In addition, the IDF has unveiled a new generation of its autonomous border protection vehicle, Jaguar, which was developed by Israel Aerospace Industries’ (IAI) ELTA Systems Division. The Jaguar is equipped with a multi-weapon payload and an overall set of sensors that enable a small group of vehicles to hermetically seal a border of tens of kilometers, controlled by an extremely small human team deployed remotely.

At the same time, other UGVs are being integrated by other forces in the UK, France, Italy, Australia, South Korea, Poland, Russia, Turkey, and in other countries. 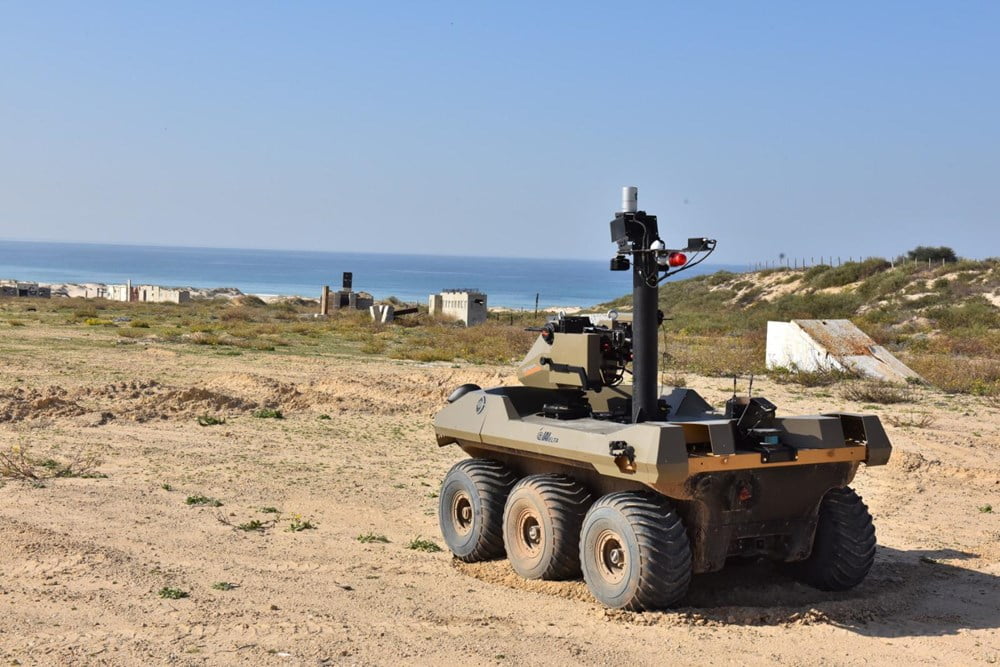 A key factor in the ability of such robotic vehicles to operate at a sufficient range and to withstand long mission endurance is high energy capacity onboard for each sortie, and high reliability of its traction and power systems. If such a vehicle becomes stuck or malfunctions in the middle of its mission or, even worse, when exposed to enemy fire, not only does the mission fail but a team of soldiers has to recover the vehicle while placing their lives in danger.

On top of this, the robotic vehicle  is limited in weight and volume, while the designers squeeze in as much useful weight as possible.

In order to increase mission reliability and simplicity of operation, and to reduce the acoustic and thermal signatures of tactical robots, electric motors and batteries are usually the preferred propulsion technology. As a result, the batteries that power autonomous vehicles require extremely high energy capacity. In addition, these batteries need to have high-power density to support traction in complex terrain and http://lignesdedefense.blogs.ouest-france.fr/archive/2021/03/31/quand-emia-part-au-combat-avec-des-robots-terrestres-22012.htmlsimultaneous multi payload and weapon operations, communication and sensors.

The importance of using the right scaling of batteries was illustrated recently when the French army demonstrated a four-legged robot called Spot. According to a report in the French newspaper Ouest-France, the robotic dog ran out of energy during the exercise and had to be carried by soldiers. Fortunately, this was only a drill.

In the coming years, a larger number of military robots will be deployed, and a dead battery event may reduce trust in the ability of robots to fulfill their missions.

When considering potential battery options for military robots, there are several options available. Most armies consider either Li-Ion NCA or Li-Ion LFP chemistries.

While LFP batteries are considered safer for vehicle applications, NCA offers double energy density. In our opinion, as robots are not human, and were originally designed to carry out more dangerous missions, they can take yet another risk by being equipped with batteries of the highest energy density, i.e., Li-Ion NCA, even if they are considered to be less safe. After all, Tesla drivers around the world consider them to be safe enough.

LFP, on the other hand, is mostly recommended for manned vehicles and personnel carriers where a battery that is hit by enemy fire may endanger human soldiers.

Over the next decade, robots are expected to become more sophisticated and, as we know from military history, complex missions mean greater weight and volume. To date, several future robotic programs have indicated that the next generation of UGV will weigh tons instead of tens of kilograms, and mission endurance will be measured in days rather than in hours. A good example for such a robot is General Dynamics Land Systems 10-Ton TRX.

The writer is VP Sales and Marketing of Epsilor Electric Fuel