Epsilor’s $3 million contract is to develop and deliver 400 multi-channel tactical chargers, spares and services, with options for up to an additional 350 chargers over the next four years

Dimona, Israel – May 3, 2018 – Epsilor-Electric Fuel, a part of Arotech Corporation’s Power Systems Division [NasdaqGM: ARTX], has won a tender from the Canadian Department of National Defense (DND) worth approximately US $3 million in its initial phase.

The Company will develop and provide an innovative charger designed to meet the operational and technical needs of the Canadian Armed Forces Integrated Soldier System Suite (ISS-S) Program. 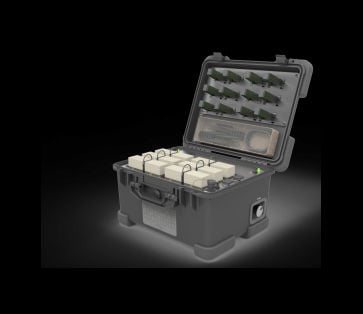 The contract includes 400 charger units, spares and other services, as well as options to order up to an additional 350 chargers within the next four years. The Canadian Government Procurement Notification can be viewed at www.buyandsell.gc.ca/procurement-data/award-notice/PW-QD-027-26613-001.

The Canadian Armed Forces are among the most active NATO-member militaries, with a full-service record in all recent major NATO conflict areas, including the former Yugoslavia, Iraq, and Afghanistan, as well as in worldwide UN peace keeping missions.

The Canadian ISS Program aims to equip thousands of dismounted soldiers with state-of-the-art C4I systems that include battle management system, intelligence, surveillance and reconnaissance, and target acquisition equipment. As ISS energy com-ponents support all wearable electronic equipment in long dismounted operations, the Canadian Armed Forces identified battery recharging as a critical capability of the ISS and decided to obtain a dedicated multi-channel charger that will support its soldiers in the field, in vehicles, in forward operating bases and for high volume recharging of thousands of batteries simultaneously.

The new charger offered by Epsilor supports the LI-145/LI-80 family and BB-2525/U conformal wearable batteries used by the Canadian forces, as well as by various NATO armed forces. Epsilor’s solution is based on a 12-channel charger, packed in a rugged tactical case that will enable soldiers to charge large numbers of batteries in depot as well as in the field and in moving vehicles (“charge on the move”). The charger, which is designed to receive power from different sources such as an electric grid and different vehicle sources with flexible input voltage, is intended to improve tactical flexibility and the energy independence of its users.

“We are very proud that Epsilor was chosen to become part of the prestigious Canadi-an ISS program”, said Alex Stepansky, Epsilor’s General Manager. “Winning the Canadian tender demonstrates our competitiveness and the quality of our design and manufacturing. This high-profile project could pave the way for future programs with the Canadian Defense sector as well as with other NATO customers.”